Why Microsoft got it so wrong with Exchange 2013

In part one of our series I discussed the major strategic enhancement to IBM's Notes Domino 9 Social Edition, through the increased focus upon moving users 'Beyond email' and towards more productive ways of collaboration.
With the IBM platform;


IBM recognises that generation differences exist between employee, and that not everyone will want to engage directly in newer Social Business tools delivered via a browser in collaborating. For many, the email client and the inbox itself are the major focus of their efforts. IBM Notes 9 Social Edition recognises this by providing access to the capabilities to share and collaborate with others without leaving the inbox itself, in an evolutionary manner. In short, it provides the transition path needed as work practices evolve.
A technology platform, however, is only as good as the alternatives available. Hence the need to evaluate not just IBM's latest platform release from a technology perspective, but also from the strategic direction being taken against others.

In late 2012 Microsoft announced general availability of the 2013 version of their Exchange mail server, and Outlook email client. This is a part of a long line of releases of their flagship product, which like IBM, stretches back over 20 years.
However, that is where the similarities between IBM and Microsoft ends. Microsoft have taken a very different strategy in relation to collaboration, and that difference is no where more apparent in their latest email products, Exchange and Outlook 2013. Despite any marketing gloss that may be painted by Redmond, Microsoft's collaboration strategy remains steadfast.
The enactment of their strategy is no where more apparent than in the capabilities provided via their Outlook 2013 email client for their messaging solution. Consider the 'new' Microsoft Outlook 2013 interface shown in the illustration below. 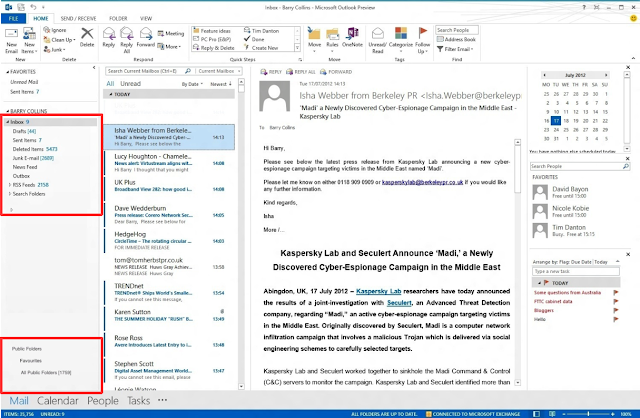 As with their previous Outlook 2010 version, the toolbar earlier users grew used to is now the 'Office' ribbon providing a familiar method of interaction to those familiar with their Office product range. On the right hand side we have the familiar day at a glance items, the mailbox panel and preview pane remain the same, as do the Exchange folder list on the left hand side. What has changes is a newer, more streamlined interface and colours following the formats set by Web 2.0 interfaces of today. Two items are of particular attention.
Personal folders also contain the users personal archive of mail items and attachments that are taken from the inbox and stored in this separate Exchange based folder. This is another difference between the IBM and Microsoft approach. Archived items reside in a separate Archive folder that exists within the Exchange database, not on the users device, which is one of the reasons why Microsoft mail systems require dramatically more disk storage. But I digress somewhat.
So the difference is very clear.

Redmond has totally missed the mark with what the market requires.

Microsoft Exchange 2013 does little, if anything, to address the demands for more productive ways of working beyond email, contrasted to IBM Notes Domion 9 Social Edition.